*About a four minute read*

The nature of intelligence is still in question. Intelligence is typically rated along a scoring scale with regards to one’s ability to answer a test question, one’s knowledge on a subject or even how well a problem is solved. The psychologist Howard Gardner states in his essay, “A Rounded Version: The Theory of Multiple Intelligences,” that human competence is more accurately defined as a multitude of problem-solving abilities and skills. These intelligences are categorized into eight different areas: Musical, Bodily-Kinesthetic, Logical-Mathematical, Linguistic, Spatial, Naturalist, Interpersonal, and Intrapersonal. Although many consider intelligence as a quantifiable concept, intelligence cannot be defined as a single entity and deserves to be explored. 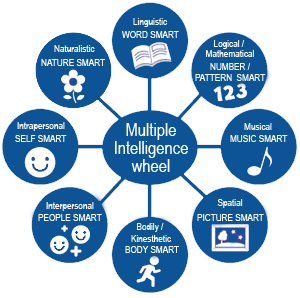 Intelligence is the ability to solve any problem using specific skills. The traditional view of intelligence is seen as the ability to solve problems based on standardized testing throughout one’s lifespan. In contrast, the multiple intelligence theory states that individuals possess unique problem-solving skills that are biologically innate, allowing one to approach dilemmas through different routes. For example, two children approach a river and are perplexed about how to traverse it. One of the children is an avid swimmer and decides to ford the river with a graceful backstroke. The other child, who lacks any physical talent, decides to travel upstream and find a log that spans a narrower part of the river, thus achieving the same goal. This scenario may be an example of a bodily-kinesthetic person vs. a spatial person where each child, posed with the same setback, accomplished the same goal with different reasoning.

Statistics, awards, and recognitions measure the unique abilities considered alternative intelligences. The standard method of measuring intelligence is the IQ test, or the Stanford-Binet test, in which a person completes a series of tests which measure his or her abilities to reason within a standardized environment.

These tests formulate a numerical score which is then compared to an international mean and labeled to that individual as a sort of intelligence identification card. This number might become a predictor of achievements in schools and colleges, but not in life. Concerning Gardner’s eight intelligences, each area amounts measurability that records statistics, awards, and personal recognition. For example, a baseball player’s entire career becomes written down in a record book which is then compared to other players and thus determines which player is the best. Likewise, authors, playwrights, and screenwriters are also elevated to a stature when they receive honors such as Pulitzer, Tony and Oscar awards. These recognitions of talent are a quantifiable element that is considered intelligence and success within given expertise.

Finally, while many areas of human competence struggle to be defined, each ability or problem-solving skill has passed scrutiny among many scientific fields to be considered an intellectual. The complexity of human behavior began to trouble philosophers and scientists centuries ago, but in modern times human intellect begins to diversify into different groupings. “Evidence from brain research, human development, evolution, and cross-cultural comparisons was brought to bear in our search for relevant human intelligences: a candidate was included only if reasonable evidence to support its membership was found across these diverse fields,” states Howard Gardner. Additionally, Gardner states that each “intelligence” must meet a set of operations and a visual medium in the form of symbols. For instance, a bodily-kinesthetic intelligence must possess an advanced motor cortex, part of the brain responsible for movement. Similarly, interpersonal intelligence requires the capacity to discern distinctions in human behavior, skills attributed to psychologists, teachers, and anthropologists as well as political and religious leaders. The definitions of each of the eight intelligences are well examined within scientific and social atmospheres and allow the world to expand the concept of human understanding.

Intelligence has been investigated along many different aspects and through a variety of examples. Howard Gardner presents an alternate view of the intelligence theory that discusses an array of mental powers considered intelligence.

Intelligence is seen as a particular skill or set of talents that enable a person to solve a particular predicament. These skills allow different people to figure out similar problems using genetically inherent attributes. Each intelligence can be accurately measured employing statistical record and personal achievements. Furthermore, evidence suggests that each of the intelligences has passed a range of inspection across many criteria which is agreed upon among the scientific community, thus substantiating legitimacy. Intelligence within the human race is dynamic and must be explored to the full potential.

I've worn many hats and had many lives. I hope to share all I can, as best I can. View all posts by Sean

Ask and you may receive